← more from
In The Red Records
Get fresh music recommendations delivered to your inbox every Friday.
We've updated our Terms of Use. You can review the changes here.

by Kid Congo Powers & the Near Death Experience 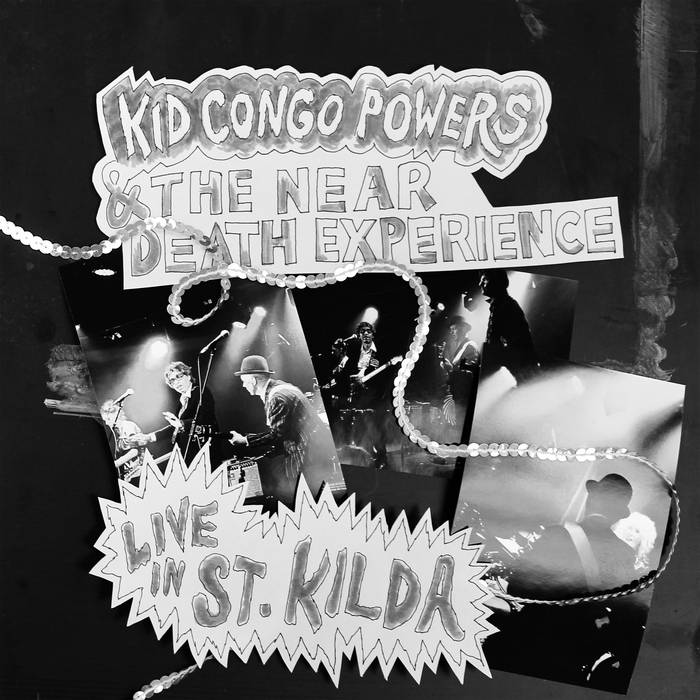 Blood In Your Ear

Live in St. Kilda was a rare appearance at which Powers was backed by a group other than his longtime combo the Pink Monkey Birds. The November 9th, 2019 show at the titular Australian city’s MEMO Music Hall was mounted to launch Nine Parts Water, One Part Sand: Kim Salmon and the Formula for Grunge, the autobiography of the singer-songwriter-guitarist of the famed Antipodean band The Scientists (whose most recent album Negativity was released by In the Red in 2021).

The hard-rocking group that ended up backing Powers on the show flashed some storied credentials of their own. Guitarist Harry Howard is the brother of the late Rowland S. Howard of the Bad Seeds, and played with Rowland in Crime and the City Solution and These Immortal Souls. Harry’s partner Edwina Preston is a keyboardist, a member of ATOM and the tribute unit Pop Crimes (playing the songs of Rowland Howard), and a well-known novelist and nonfiction writer. The group’s other couple, bassist Dave Graney and drummer Clare Moore, are well known Down Under for their earlier groups The Moodists and the Coral Snakes.

“Kim wanted me to come and play for his book launch,” says Powers. “There was not enough budget for me to bring the Pink Monkey Birds. And we both said, ‘Oh, let’s use Harry’s band.’ That was a no-brainer, and it was great. I loved playing with them. They played with the Pink Monkey Birds when we went to Australia. They were so great, and I really love their albums. We did some of their songs, because it was a collaboration.”

The evening featured the Pink Monkey Birds’ “LSDC,” “Black Santa,” and “La Llorona,” The Gun Club’s “Sex Beat,” and The Cramps’ “New Kind of Kick” and “Garbage Man.” The Near Death Experience’s repertoire was represented by “The Only One, “”She Doesn’t Like It,” and “When He Finds Out”; the latter song was penned by the late Spencer P. Jones of Beasts of Bourbon. The night also included an eclectic batch of cover versions: East L.A. rock ’n’ roll heroes Thee Midniters’ “I Found a Peanut,” ‘60s girl group The Shangri-Las’ “Sophisticated Boom Boom,” and proto-punk noise terrorists Suicide’s “Diamonds, Fur Coat, Champagne.”

The rousingly received MEMO Music Hall gig served as a homecoming for ex-Bad Seed Powers, who also played a legendary Aussie tour with the Gun Club in 1983 as the Scientists’ opening act.

Powers says, “We’ve been to Australia several times and have built up a great following.” You can hear the love and feel the fire on Live in St. Kilda."

Bandcamp Daily  your guide to the world of Bandcamp